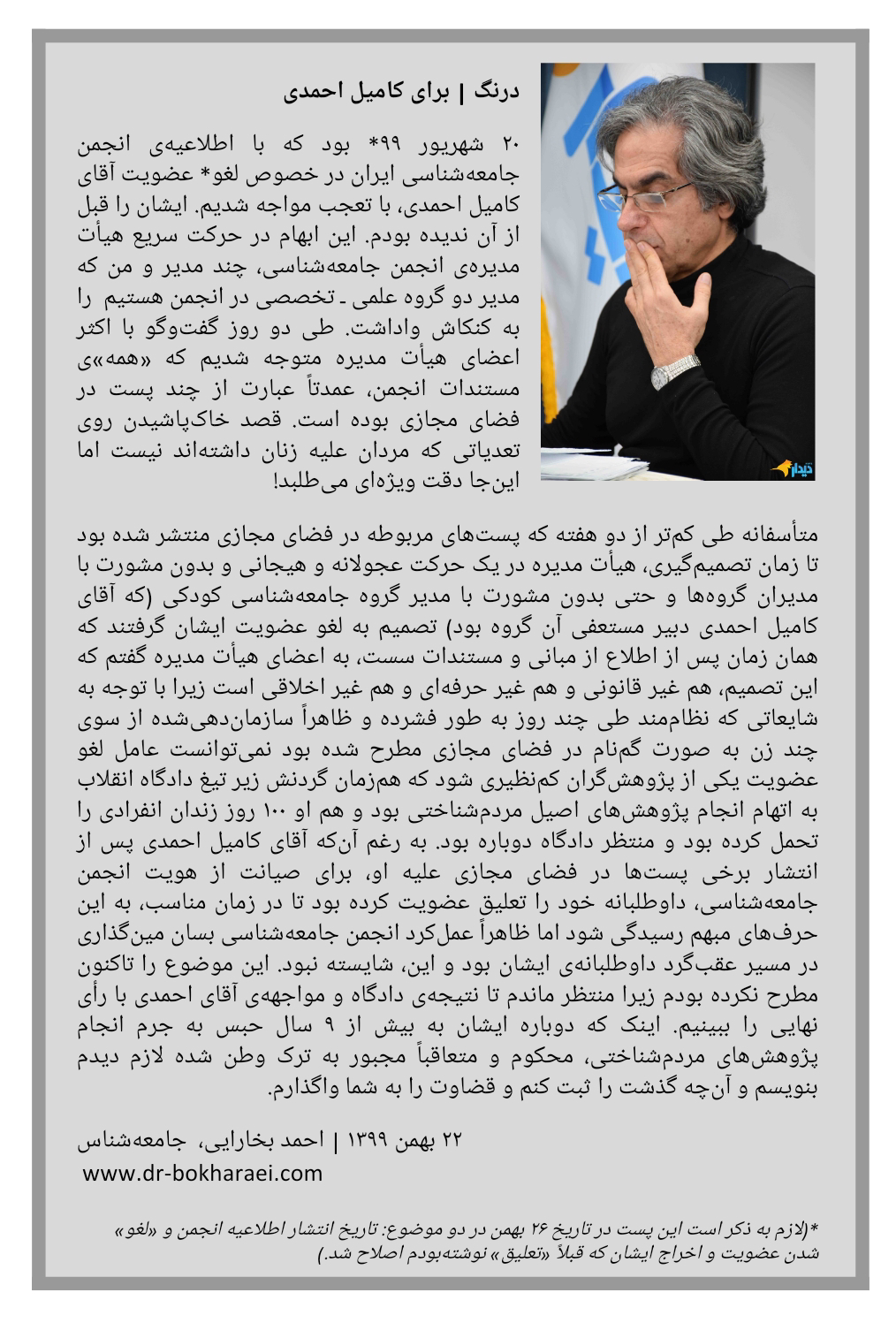 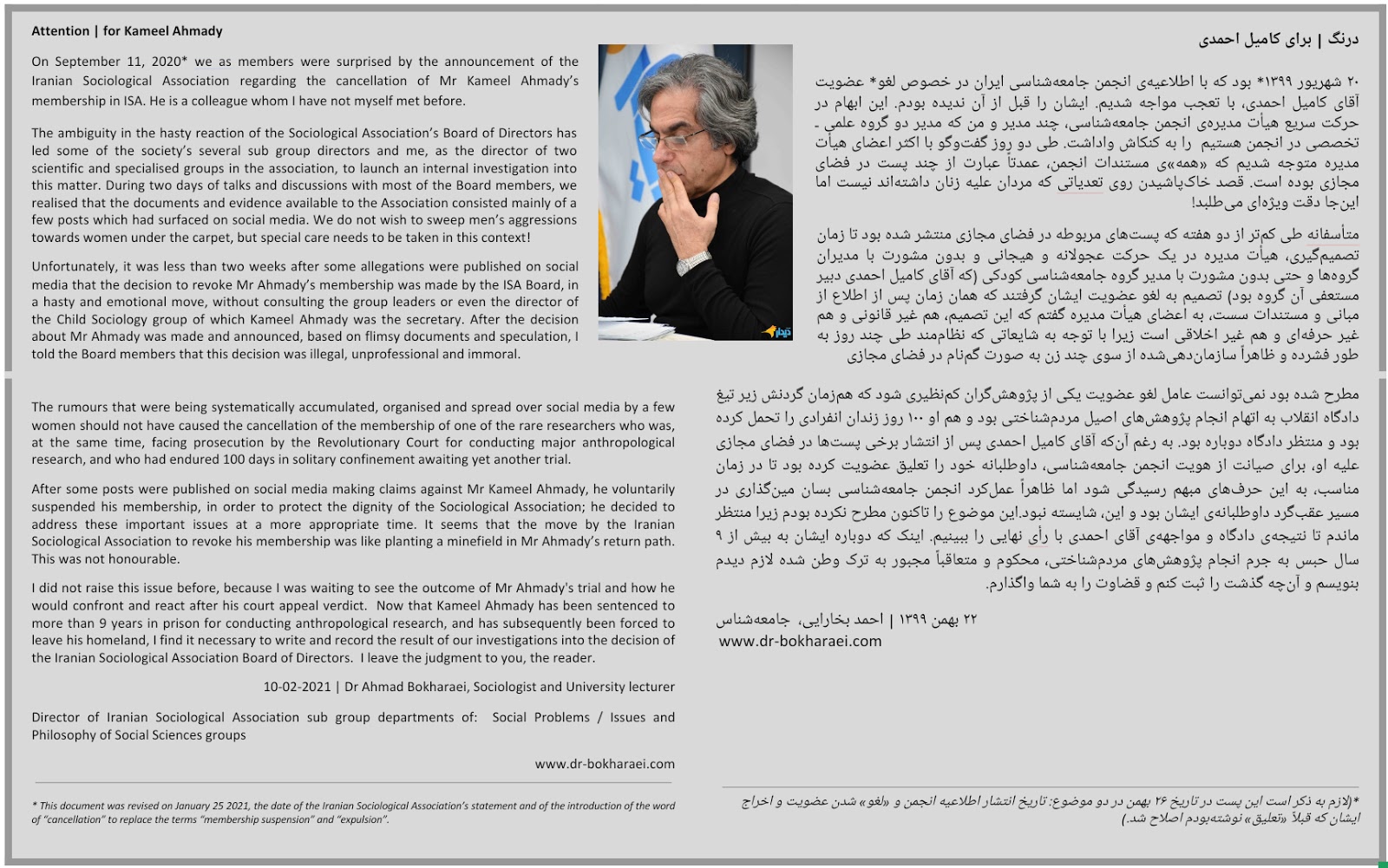 Attention | for Kameel Ahmady
On September 11, 2020* we as members were surprised by the announcement of the Iranian Sociological Association regarding the cancellation of Mr Kameel Ahmady’s membership in ISA. He is a colleague whom I have not myself met before.
The ambiguity in the hasty reaction of the Sociological Association’s Board of Directors has led some of the society’s several sub group directors and me, as the director of two scientific and specialised groups in the association, to launch an internal investigation into this matter. During two days of talks and discussions with most of the Board members, we realised that the documents and evidence available to the Association consisted mainly of a few posts which had surfaced on social media. We do not wish to sweep men’s aggressions towards women under the carpet, but special care needs to be taken in this context!
Unfortunately, it was less than two weeks after some allegations were published on social media that the decision to revoke Mr Ahmady’s membership was made by the ISA Board, in a hasty and emotional move, without consulting the group leaders or even the director of the Child Sociology group of which Kameel Ahmady was the secretary. After the decision about Mr Ahmady was made and announced, based on flimsy documents and speculation, I told the Board members that this decision was illegal, unprofessional and immoral.
The rumours that were being systematically accumulated, organised and spread over social media by a few women should not have caused the cancellation of the membership of one of the rare researchers who was, at the same time, facing prosecution by the Revolutionary Court for conducting major anthropological research, and who had endured 100 days in solitary confinement awaiting yet another trial.
After some posts were published on social media making claims against Mr Kameel Ahmady, he voluntarily suspended his membership, in order to protect the dignity of the Sociological Association; he decided to address these important issues at a more appropriate time. It seems that the move by the Iranian Sociological Association to revoke his membership was like planting a minefield in Mr Ahmady’s return path. This was not honourable.
I did not raise this issue before, because I was waiting to see the outcome of Mr Ahmady's trial and how he would confront and react after his court appeal verdict. Now that Kameel Ahmady has been sentenced to more than 9 years in prison for conducting anthropological research, and has subsequently been forced to leave his homeland, I find it necessary to write and record the result of our investigations into the decision of the Iranian Sociological Association Board of Directors. I leave the judgment to you, the reader.
10-02-2021 | Dr Ahmad Bokharaei, Sociologist and University lecturer
Director of Iranian Sociological Association sub group departments of: Social Problems / Issues and Philosophy of Social Sciences groups
www.dr-bokharaei.com
* This document was revised on January 25 2021, the date of the Iranian Sociological Association’s statement and of the introduction of the word of “cancellation” to replace the terms “membership suspension” and “expulsion”.
درنگ کامیل احمدی Kameel ‎Ahmady